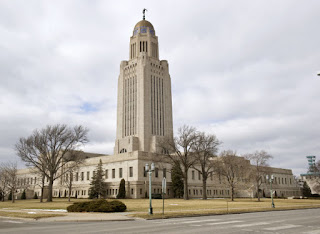 Nebraska has a law in place to prevent juveniles from being added to the evil government blacklist, but it does not extend to people convicted as juveniles who later move to Nebraska. This bill will change that and apply the protection to ALL juveniles regardless of play of conviction.

LINCOLN, Neb. —
A state senator from Bellevue wants to change the rules for Nebraska's sex offender registry. Sen. Carol Blood's bill applies to juveniles convicted of sex crimes in other states who then move to Nebraska.

Blood calls her bill a "cleanup" bill, which would fix language in state law to avoid future lawsuits and treat all juveniles the same.

"It was an error in language and it needs to be corrected," Blood said.

Right now, the law reads that juveniles convicted of sex crimes in Nebraska do not have to register as sex offenders, while juvenile offenders who move here from other states do.

"All things need to be equal for all young people here in Nebraska, regardless whether they're new to the state or born and raised here," Blood said. Her bill would eliminate sex offender registry requirements for all juveniles in Nebraska, both natives and those who move in after conviction.

A Minnesota family agreed. The sued the Nebraska State Patrol in 2017 to fight to keep their 15-year-old son off the registry. The Nebraska Supreme Court ruled in their favor.

As a result, NSP removed 74 other juvenile names from Nebraska's list and quit requiring any juveniles to register. Blood wants to fix what's broken.

"If we don't correct the language in our state statute, we open ourselves up to additional lawsuits," Blood said.

The legislature's judiciary committee heard testimony for the bill Wednesday. Among those speaking were attorneys who said the registry exposes juveniles. Others argued listing juveniles on the registry does not promote juvenile rehabilitation.

"This public information would not only impact the juvenile, but their entire family," said proponent Margene Timm.

"(The bill) gives these kids a chance at redemption, a chance to change," he said.

Jay said removing juveniles from the registry relieves them of the stigmas that go along with it.

Jay and one other man at Wednesday's hearing advocated for looser laws when it comes to the adult sex offender registry.

Blood said that is not what her bill is about and said she does not support any other changes.

No one spoke in opposition to the bill. The judiciary committee is expected to vote soon on whether or not to advance the bill to the floor.
Posted by oncefallendotcom at 10:31 AM